Catch up on everything from recent building updates to local
upcoming events and exciting news from ICDM Haiti and beyond. 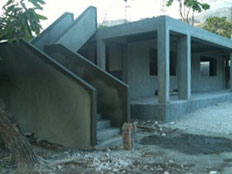 When I returned from Haiti last October, one of the first questions people asked me was, “How much progress has been made in the reconstruction?” – referring to the 2010 earthquake. The answer to this question is complex.

Much cleanup and rebuilding has been done, but much more remains to be done. The loss of so many lives and the crippling injuries of so many more have permanently affected Haiti’s people. Moreover, the underlying poverty is still prevalent, presenting both need and opportunity. Yet, what I found pervasive in Haiti was hope! Hope is the resource that looks beyond the immediate needs and sees the real possibility of a brighter future.

The eight men on our team worked on a school building in the community of Bayonnais. We witnessed hope in the lives of the nearly 600 children who attend the school.

After we had finished our work on the roof, the children climbed to the top of the building and played on the concrete forms and supports. They were excited because we were helping to finish their school and church building. Their laughter and joy were expressions of hope. We visited in the homes of several families in Bayonnais, and they were so happy to have us stop by. Their smiles and conversation were full of hope.

Since the last time I visited the school, the security wall around the campus had been complete and a water purification plant had been installed to provide residents of Bayonnais withclean drinking water for just pennies a month. A passenger bus and a second bus modified to carry both people and supplies have been acquired. These improvements, along with others,have increased the effectiveness of the school, helped to bring in more work teams to complete the construction, and provided a more economical method of transport for people, supplies and materials.

All of this adds hope to the lives of the students and their families. As these children learn and grow, they will have the opportunity to change the future of their nation by becoming leaders and workers with highly developed skills and abilities.

International Christian Development Mission is now looking to add a trade school, finish its School of Evangelism building in Cap-Haitien, rebuild its headquarters building in Port-au-Prince, and add new schools in other communities around Haiti. This kind of vision is the surest sign of hope for Haiti.

Hope is built on dreams and visions, and no visions are more powerful than those that see and develop the potential in children and young people. These are the dreams that will bring Haiti into a brighter future. These are the visions that inspire hope and that draw us back to this nation of beautiful and hopeful people.

As a team, we want to thank the people who supported us with their prayers and with donations of money and materials needed for our project. Your compassion and generosity helped us to bring hope to the people of Haiti.